Enemy movement on the Norman coast

Enemy movement on the Norman coast

Letter from the Deputy Prefect to the Prefect dated June 19, 1811 ; title: " enemy movement on the coast "

In this letter, the Deputy Prefect of the Lower Seine informs the Prefect that boats from Saint Valery en Caux are regularly attacked by British boats.
Fishing for mackerel and herring was a very important activity in Saint Valery en Caux and these vessels were quite large and carried between 40 and 70 barrels.
The sub-Prefect explains how the attacks are conducted on several ships : English sailors catch fish not on just one but on several boats and resell the stolen fish in British pounds.
We can explain these attacks by the political context. Indeed, when the sub-prefect alerts the prefect in 1811, the continental blockade has been officially implemented for 5 years. However, the English and French sailors do not hesitate to chase one another whenever they can, even in peacetime. But these practices are so detrimental to fishing and trade that the Prefect decides to regulate fishing practised by Saint Valery’s veterans.
In the middle of the 19th century, he delegated Laurent Mathieu Anquetil – being a second boatswain, a sailor off-duty and shipowner of “the Hope”, to enforce the application. His mission is to navigate in the waters off Saint Valery to keep watch of the English comings and goings. All ships failing to respect these strict regulations were disarmed. Once at sea, if the presence of British cruisers was confirmed, the fisherman was to obey the signals and to immediately rally Saint Valery’s coasts. The lookout vessel was required to always have the national flag flying at the top of the mast of his ship and to remove all vessels under its supervision. At that time, the fishing area did not exceed a cannon shot. The fishing was strictly forbidden at night, each vessel was required to join the port before sunset and not to leave before sunrise in the morning. The rule was not to let the fishermen, being approached by the British, give their catch. The authorities also feared fishermen to disclose information relating to the events of France . 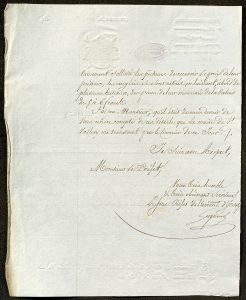 Fund of the Department’s general administration