The Gospels of Jumièges

The Gospels of Jumièges

11th century is deeply marked by the appearance of illumination in Norman manuscripts. This is mainly due to the monastic revival and the need for religious communities to build a library. England is so famous for its art schools and its signature style. Several workshops are experiencing significant radiation as those of Canterbury and Winchester.

Given the related trade with England, the Norman abbeys start to order manuscripts across the Channel, and then send their copyists and illuminators to be trained in these schools.

This manuscript from the Abbey of Jumièges is one of the few that have been written entirely by the Normans in England, in the monastery of Abingdon . It was made at the request of Rainaldus, abbot of the monastery from 1087 to 1097, former monk of Jumièges, for its original abbey.

These are the Gospels, some initials are performed on full page with an orange red ink.
In folio 14 recto (view 1), we can see an initial L containing a dragon.

Looking closely, we see another stroke made the point slightly offset with the letter painted. 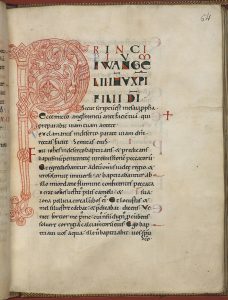 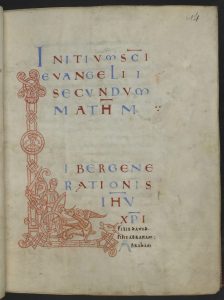